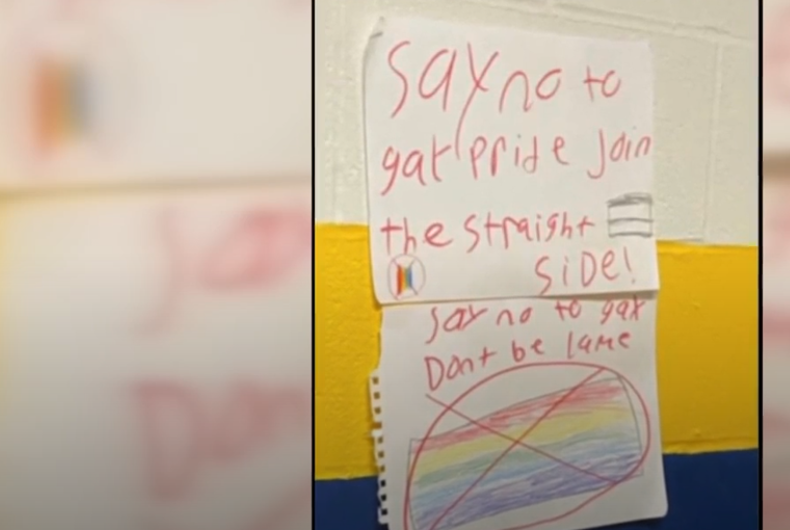 A group of four middle schoolers at Cosgrove Middle School in upstate New York tore down numerous Pride Month posters, ripped them up, and then replaced them with hateful posters out of spite. The posters that were put up in replacement boast the phrase “Say no to gay pride. Join the straight side!”

After the incident, the school district has come out against the actions of the middle schoolers and has apologized to LGBTQ students and families.

Related: Students agree to de-gay GSA after enraged parents attacked the club’s sponsor as a “predator”

With Pride Month underway, the Cosgrove Ally Club created posters to support the LGBTQ members of the school community, both in class and at home. The posters had been supported by faculty and staff to be put up. However, a group of students were upset with the display and decided to express themselves by tearing them down.

The incident sparked outrage after an image was shared on social media displaying one of the anti-gay signs. In place of the Pride Month signs, the image that was shared showed that the poster also included the phrase, “Say no to gay. Don’t be lame.”

The school district says two unnamed students took it upon themselves to remove a number of the club’s Pride support signs and then two other students joined in and posted the derogatory signage encouraging students to be straight.

According to WHAM News, the district says the anti-gay poster was never approved, and the following day, issued an apology to students, reading in part: “This behavior is disheartening. Every student, staff, and family member should be able to feel safe and welcomed in our schools, and we want to extend our apologies to our LBGTQ+ students and families for this incident. Please know this behavior will not be tolerated and we are continuing to review this incident under the Dignity for All Students Act.”

After an investigation into the matter, the school found out who the students were that took down the posters. They then spoke with the students’ parents to discuss disciplinary actions. It is unknown whether the students will be reprimanded for their actions because the exact nature of their punishment cannot be shared due to privacy laws.

This isn’t the first time that schools have become a battleground when it comes to LGBTQ representation.

Earlier this year, in Williamson County, Tennessee, a group of LGBTQ Pride posters was torn down in a local high school where the state has passed numerous anti-LGBTQ bills.

The biggest battleground state for LGBTQ representation is still Florida after it passed its anti-LGBTQ bill known as the “Don’t Say Gay” law. The law prevents schools and teachers from discussing sexual orientation and gender identity in younger grades and requires such discussions to be “developmentally appropriate” in older grades, but instead of defining what that means the vague law empowers parents to sue school districts if they believe the law was violated.

Since that bill has passed, numerous walkouts at high schools across the state have occurred. People have also taken to Twitter to share their opposition against the “Don’t Say Gay” bill.