Rail passengers across Britain experienced further disruption on Wednesday — a day after the biggest transport strike in a generation — as the government urged the industry to “hold the line” in negotiations with the RMT union.

Only about 60 per cent of services are expected to run on Wednesday as the industry resets after 24 hours of industrial action, with many trains out of place and overnight shifts disrupted by the strikes, which ran until midnight.

After major disruption to the morning peak, train services are expected to improve throughout the day. But some operators, including Northern, have advised passengers not to try to travel at all unless essential.

In London, where there was a single day of strike action on Tuesday, Transport for London told passengers to delay journeys until mid-morning if possible.

RMT negotiators were set to resume talks with Network Rail, the infrastructure owner, and 13 train operating companies at 10am in a bid to avoid further strikes scheduled for Thursday and Saturday.

Justice Secretary Dominic Raab said the government and industry had to “hold the line” in the talks and push to “reform the way the railways operate”.

Speaking on LBC, he added: “The one thing that will keep inflation higher for longer and undermine pay packets for longer is if we have spiralling public sector pay increases beyond what is responsible . . . We can’t allow, I’m afraid, the unions in this very militant way that they’ve proceeded to win this argument.”

Industry executives said the starting point for Wednesday’s talks would be an offer rejected by the union on Monday: pay rises of about 2 to 3 per cent, with some scope for a higher figure if the union accepts changes to working practices to free up more cash to go to wages.

But RMT leader Mick Lynch told the FT this week his priority was to ensure no compulsory redundancies, and that he would then move on to discuss modernising terms and conditions and pay rises.

The RMT leadership is pushing for pay rises of 7 to 8 per cent to compensate for inflation that hit 9.1 per cent in May, a 40-year high.

Network Rail has also told unions it would formally start a consultation on 1,800 job losses and “dumping outdated working practices”, but said the “vast majority” of these could be achieved through voluntary redundancy.

Even if a deal is reached and the action called off, the rail industry said there would still be disruption on Thursday as the network had planned for an emergency timetable.

However, road traffic flows on Tuesday remained similar to levels a week before, lower than would normally be expected during a rail strike.

Peak traffic flows on major A roads and motorways were similar to the previous Tuesday, while off-peak traffic volumes were 5 per cent lower than usual, a government official said.

In London, tube journeys on Tuesday morning were 95 per cent down on the previous week, while bus journeys rose 7 per cent.

Many people took to cycling, as bicycle hires rose 46 per cent on the previous Tuesday, TfL said. But many others appeared to work from home. The average office occupancy in the city dropped sharply to just 9 per cent, according to Freespace, the office services provider, down from 42 per cent the week before. 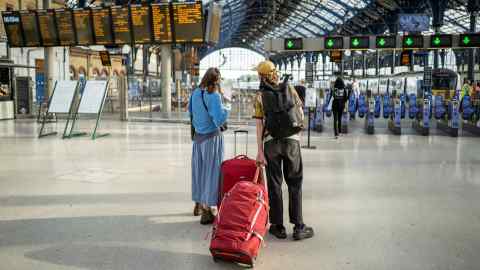 Freespace, which deploys over 140,000 sensors to measure building occupancy and environmental conditions, said that the average office occupancy across the UK during the day was higher at 22 per cent.

But even this was half the level of the week before, when the average office occupancy across the country was 40 per cent.

Tamzen Isacsson, chief executive of the Management Consultancies Association, said the rail strike “had a negligible immediate impact on the industry and client work”.

Noting that companies had shifted to working from home during the pandemic, she added: “It was a planned strike that was well communicated in advance so firms have had the time to plan but of course prolonged strike action will inevitably have more direct impact.”

Cassidy Hutchinson stands by her testimony amid pushback