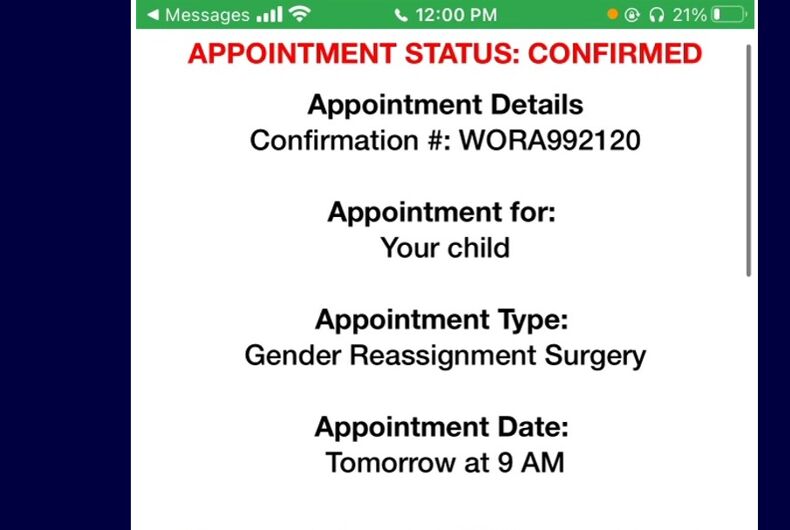 Screenshot of the textPhoto: via Michigan Advance

A Michigan Republican sent an unhinged text message to supporters to raise funds for his campaign that claimed that their children had been signed up for “gender reassignment surgery.”

Like many anti-LGBTQ demagogues before him, state Sen. Thom Barrett (R) is appealing to his supporters’ fear of having an LGBTQ child in order to get them to fork over cash, according to a screenshot obtained by Michigan Advance.

Appointment for: Your child

Appointment Date: Tomorrow at 9 AM

If you would like to CANCEL this appointment because you do not believe in teaching young children about dangerous transgender ideologies, please sign your name NOW.

If we fail, our children are doomed 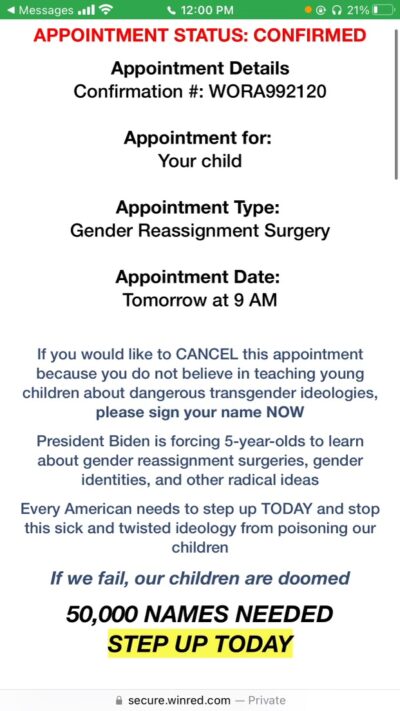 The message has been replaced by another appeal for funds that blasts: “STOP BIDEN FROM DOING THIS TO OUR KIDS!”

The fundraising plea claims that “radical Democrats opposing Tom are fighting DIRTY” as Barrett appeals to base transphobia to raise funds. “Democrats are HELLBENT on destroying our faith, removing God from the center of our nation, and pushing transgender ideology on young children.”

Earlier this week, Barrett’s colleague, state Sen. Lana Theis (R), accused a Democrat in the state senate of being a troll and a snowflake who is “outraged they can’t teach can’t groom and sexualize kindergarteners or that 8-year olds are responsible for slavery.” [sic]

Her fundraising message claimed that “our children are under assault in our schools,” citing “gender-bending indoctrination… inappropriate sexual content, stealing their innocence… Critical Race Theory – pitting children against one another.”