The Federal Reserve is set to embrace an increasingly aggressive approach to monetary policy tightening as it confronts the highest inflation in four decades.

During its two-day policy meeting, officials on the Federal Open Market Committee have been actively debating the merits of implementing the first 0.75 percentage point increase since 1994. An adjustment of that magnitude would lift its benchmark policy rate to a new target range of 1.50 per cent to 1.75 per cent. Their decision will be announced at 2pm Eastern time on Wednesday.

The discussion marks an abrupt shift for US central bankers, who just before the start of the 12-day “blackout” period ahead of the meeting — during which policymakers are limited in their public communications — indicated broad support for a second consecutive 0.50 percentage point increase, which would have been the first such back-to-back move in nearly 30 years.

The pivot comes after data released on Friday showed an unexpectedly large jump in consumer prices in May and a worrying rise in inflation expectations, suggesting that Americans are growing more concerned about the economic outlook.

Losses have also mounted across Wall Street as more forceful monetary policy tightening has been priced in. The S&P 500 is now more than 20 per cent below its January 2022 all-time high, a decline commonly identified as a bear market, while US government bond yields have surged to multiyear records.

Two-year Treasuries, which are most sensitive to changes in the trajectory of monetary policy, are trading around 3.4 per cent, up from 2.7 per cent just days ago. In one week, the yield on the benchmark 10-year note, which serves as a benchmark for global debt markets, has shot up more than 0.45 percentage points to close in on 3.5 per cent.

The Fed is also due to publish on Wednesday an updated “dot plot” mapping the individual interest rate projections of its top officials — a group that includes Lisa Cook and Philip Jefferson, who were confirmed as governors in May.

The latest release in March indicated the benchmark policy rate would rise to 1.9 per cent by year end and 2.8 per cent in 2023, where it was estimated to remain through 2024.

Now, officials could signal a fed funds rate of 3.5 per cent in December, which would translate to another 0.75 percentage point increase in July and a half-point adjustment in September, before moderating to more typical quarter-point increases for the final two meetings of the year.

Additional increases are also expected in 2023, and officials could potentially pencil in a policy rate around 4 per cent. More officials are also likely to suggest rate cuts in 2024, reflecting the fact that the economy would have slowed considerably by that point.

Soaring prices are already beginning to weigh on demand, with US retail sales unexpectedly declining 0.3 per cent in May from the previous month, according to a new report released on Wednesday. 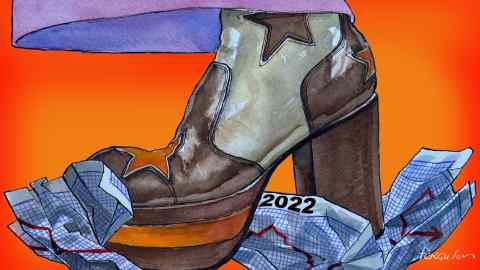 Alongside the new dot plot, the Fed will publish revised economic forecasts. In March, officials estimated core inflation, which strips out volatile items such as food and energy, would settle at an annual pace of 4.1 per cent this year before falling to 2.6 per cent in 2023 and 2.3 per cent in 2024. As of April, that figure stood at 4.9 per cent.

Despite substantively tighter monetary policy, the unemployment rate was not projected to rise significantly from its historically low level, steadying instead at 3.5 per cent through the end of next year, per March’s projections. The economy was also seen expanding each year by 2 per cent or more through 2024.

A recent poll of leading academic economists by the Financial Times showed that nearly 70 per cent believed the US economy will tip into a recession next year, counter to what Fed officials have argued.

Terrorists behind 2015 Bataclan attack sentenced to life by Paris court

Brides Call Out Petty Bridesmaids Who Ruined The Wedding