Bulgaria’s main opposition party has said it will support lifting the country’s veto on the start of EU accession talks with North Macedonia, in what could herald a significant breakthrough in the stalled process of the bloc’s enlargement in the western Balkans.

Boyko Borisov, a former Bulgarian prime minister, said his centre-right GERB party would vote in favour of beginning the EU negotiations. If adopted by Bulgaria’s parliament, the move would also unlock membership talks for Albania as leaders of western Balkan countries and the EU prepare to meet on Thursday morning.

“This is the most correct decision for the future of the Balkans, the EU and Bulgaria,” said Borisov. “We will not remain on the dark side of Eurasia, we will not allow Putinisation,” referring to the influence of Russian president Vladimir Putin in the wider region.

European officials fear that continued delay to EU enlargement would create political instability in the western Balkans and disillusionment about Brussels’ endorsement of the region’s western orientation, which could be exploited by Russia.

North Macedonia and Albania’s membership applications have been linked together by the EU. The former has been an EU candidate country since 2005 without any progress on accession talks despite meeting many of the bloc’s membership requirements, primarily due to objections over the new country’s expressions of national identity first from Greece and then Bulgaria.

The EU’s broader stance towards eastern expansion has shifted since Putin’s full-blown invasion of Ukraine began in February, after years of resistance to potential new members. The bloc is set to agree to make Ukraine and Moldova official candidate countries this week, alongside the fresh effort to unblock the stalled process in the western Balkans.

“This is a clear signal, and a positive,” said a senior EU official of Borisov’s statement. “[But] it is not in our hands,” the official said, adding that Brussels was urging the Bulgarian parliament to take a decision as soon as possible.

The decision to back lifting the veto marks a U-turn for Borisov, whose government blocked the talks with North Macedonia in 2019 in a dispute about the former Yugoslav country’s interpretation of Balkan history.

Kiril Petkov, Bulgaria’s reformist prime minister, had been poised to strike a deal with Skopje unlocking the talks when one of the parties in his coalition pulled out in protest over the issue earlier this month, leaving him clinging on to power. 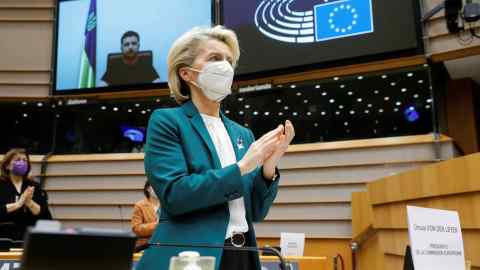 A vote on enlargement talks could be held in parliament on Thursday, with GERB’s support being enough to lift Sofia’s veto. However, some Bulgarian MPs want more details of how the EU would guarantee the concessions Sofia wants from Skopje, including rights for the Macedonian Bulgarian minority and promises not to “distort” history.

In a further sign of optimism over a potential breakthrough, North Macedonia, Albania and Serbia said on Wednesday they would take part in the summit in Brussels on Thursday with EU leaders. They had threatened on Tuesday to not attend the meeting over Bulgaria’s position.

The office of Charles Michel, the EU council president, had been in touch with the three countries in the intervening 24 hours, the senior EU official said.